As the following figure illustrates, below functions are executed in SQL Server (Overview):
1- TDS goes to the SNI component in SQL Server to be decoded into ‘Language Event’;

4- The ‘Query Plan’ sent to ‘Query Executor’ to queue up the sessions and execute the plan.

5- Access Methods component from Storage Engine gets the query plan and asks Buffer Manager to check whether the data pages are already loaded into memory, if it is not loaded yet, Buffer manager reads the data pages from data file(s) and load them into memory and changes the data, then mark the data page as dirty.

7- Then the result goes all the way back to SNI component to be encoded into TDS format and send to the client. 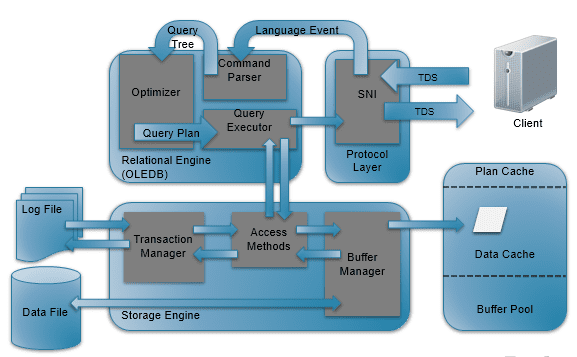 SQL Server’s plan cache is made up of four separate memory areas, called cache stores. There are actually other stores in SQL Server’s memory. The names in parentheses below are the values that can be seen in the type column of sys.dm_os_memory_cache_counters:

Each plan cache store contains a hash table to keep track of all the plans in that particular store. Each bucket in the hash table contains zero, one, or more cached plans. When determining which bucket to use, SQL Server uses a very straightforward hash algorithm.

The hash key is computed as (object_id * database_id) mod (hash table size). For plans that are associated with adhoc or prepared plans, the object_id is an internal hash of the batch text.

There are two main types of plans in the Object and SQL plan cache stores: compiled plans and execution plans. Compiled plans are the type of object we have been looking at up to this point. When SQL Server experiences heavy memory pressure, the policies used to remove cache objects ensure that our compiled plans are not the first objects to be removed.

execution contexts, are considered to be dependent on compiled plans and do not show up in the sys.dm_exec_cached_plans view. Executable plans are runtime objects created when a compiled plan is executed.

Global memory pressure applies to memory used by all the cache stores together, and can be either external or internal. External global pressure occurs when the operating system determines that the SQL Server process needs to reduce its physical memory consumption because of competing needs from other processes on the server. All cache stores will be reduced in size when this occurs.

When not under memory pressure, costs are not decreased until the total size of all plans cached reaches 50 percent of the buffer pool size. At that point, the next plan access will decrement the cost in ticks of all plans by 1. Once memory pressure is encountered, then SQL Server will start a dedicated resource monitor thread to decrement the cost of either plan objects in one particular cache (for local pressure) or all plan cache objects (for global pressure).